What is the commonest factor across all bathing soap commercials? Definitely all of them will feature a beautiful girl and speak about beauty and only beauty. Rare exceptions are there: Sharukh Khan had appeared in Lux commercial. But there also the talk point is beauty and fairness. All the commercials speak the same thing and offer magical remedies, though everyone know truth is otherwise!!

Off late I bumped across an ad that is uniquely different, a commercial that speaks about the beauty inside. And it uses Rose Murphey’s ever nostalgic ‘Peek-a-boo’; the song has been used brilliantly to reach out to the customers who had stopped thinking themselves beautiful. Watch it here: http://www.youtube.com/watch?v=jFbvq8BYEnI.

The commercial brings out the inner love one has for oneself. It tempts one to think again to be beautiful. The perfect integration of a beautiful song and some ideal visuals brings out one of the finest commercials of recent times. The song’s beauty, love and warmth are transcended into the customers to illustrate the magic of communication.

Rose Murphy (1913-1989) was one of the well known US pianist and vocalist in the last century. She was known as “the chee chee girl” thanks to her habit of regularly singing the phrase “chee chee” in many of her numbers. She enjoyed very good popularity as singer in both US and UK. She was also known as ‘The Girl with the Pale Pink Voice’. Her most famous number, ‘Busy Line’ was used by British Telecom in one of their television commercials in 1990 and it was a huge success then, looks the new Dove commercial also going to win hearts globally.

Edward Snowden has created problems not only for the US Government; Internet giants like Google, Yahoo and MSN are also feeling the heat now. US government is not yet succeeded in nailing him, where as the giants can’t simply ignore a potential threat which is spreading across the world very swiftly.

Leave the politics part. Let the US- Anti US clash take its own course. People knew that search engine service providers are literally recording all the information about the customers under the pretention of using it for delivering better service. And nobody cared it since there is no other option. What troubles Google & Co now is the resurged concern of the customers on privacy. The Snowden revelation on NSA leaking information from the search engines and FaceBook turned out to be a blessing in disguise for a small search engine, hitherto not much noticed.

www.duckduckgo.com has only one USP. That is, they don’t store any personal information at all. When you access DuckDuckGo (or any Web site), your Web browser automatically sends information about your computer. This information could be used to link the customer and his searches. Unlike any other web site DuckDuckGo do not log or store the info shared by the browser. There is little chance for NSA or NASA or even Assange to leak something which is not stored at all.

Soon after the Edward Snowden spy story broke out earlier this June, the daily searches received by DuckDuckGo got hiked by 50%. From serving 1.7 million searches a day at the start of June, it hit 3 million searches within a fortnight. The Guardian published a story on the rise of DuckDuckGo. (http://www.guardian.co.uk/world/2013/jul/10/nsa-duckduckgo-gabriel-weinberg-prism).  There upon traditional media across the world find it as a hammer to hit Google &Co.

The founder of DuckDuckGo,  launched a series of companies that went sideways. But NamesDatabase.com was a hit and he was able to sell it to Classmates.com for $10 million. This has given him courage to launch his own search engine- DuckDuckGo in 2008. DuckDuckGo is the World’s only search engine which ensures cent percent private search. It positions itself as a better search engine that respects your privacy.

What DuckDuckGo lacks is image search, as well as maps search. But it gives an option to get Google and Bing search images. More services including image search are expected from DuckDuckGo. Now it’s a David and Goliath play, let’s wait and see.

“Love to spend a rainy evening over a hot coffee…”
All most all the coffee enthusiasts would love to have this as their status on their social platforms. When arrive together, Rain and Coffee always have some kind of soothing or relaxing effect on a tired or troubled mind. Psychologists will put it simple as rain soothes mind and coffee refreshes the body.
What reminds me of this coffee-rain connection is the Economic Times article on Monsooned Malabar Coffee. (http://articles.economictimes.indiatimes.com/2013-07-13/news/40553982_1_indian-coffee-coffee-board-monsooned-malabar). It says the ‘Monsooned Malabar’ coffee – a distinguished premium variety from the Mangalore coast is a much sought after variant across Europe. Its special taste and aroma, quite milder than fresh coffee, is made by exposing the coffee beans to moisture and wind through a nine month long process. The unique flavour is developed in the coffee beans from Malabar Coast only, which is from Mangalore (Karnataka) to Kannur (Kerala).
It’s Monsoon time in Kerala now. A lot of travelers are coming to the state to exploit the Monsoon moods. It is one of Kerala’s unique products which do well in the market. When Rain and Foreigners are pouring into the State together, what would be the typical Malayalee (Keralite) doing? Sitting back on an easy chair, enjoying a hot coffee?
Try Monsooned Malabar this time, for a change 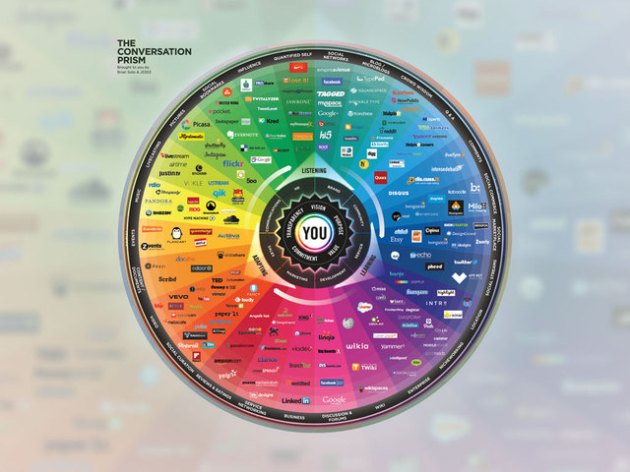 When one sees the colourful poster given here with, it is quite natural to remind about the theory of refraction of light which was taught in one of those old physics classes. The vibrant VIBGYOR colours still fascinates every one. So does the social media.

When Brian Solis and Jesse Thomas decided to come out with an info-graphic representation, showing all the vibrancy of social conversations, they named it as Conversation Prism. They conceived the white light entering the prism as the focused stream of conversations that are often grouped, but not separated by voice, context, source, or outcome. Theytookthe beam of conversation and blast it into a spectrum of discernible vivid light.

Conversations across networks were passed through the prism and got refracted. Each shade of color represents an entirely unique reflection of light, meaning separating context and intention by network. But, as the social web grew, the refracted light got shaped into a circle to help people understand that the days of one audience, one voice, one story were over. Now conversations take place in communities, obviously far beyond Facebook and Twitter.

The first version came out in August 2008 and the target was to provide a visual representation of the true expansiveness of the Social Media and the conversations that define it. It mapped the then social media spectrum completely. The social media landscape has been evolving all the time as several platforms expired and several others sprout up. Conversation Prism also has changed with it. Hence Conversation Prism entered its fourth edition, earlier this month.

And why should one resort to this clourful collage? Certainly it’s a piece of art but it work more as a motivational tool for the social media strategists. It will always remind your team that social media is beyond Facebook, Twitter, and YouTube. It familiarizes the wide horizons of social media world. It has become an international symbol of organizing the massive social media landscape into different categories.